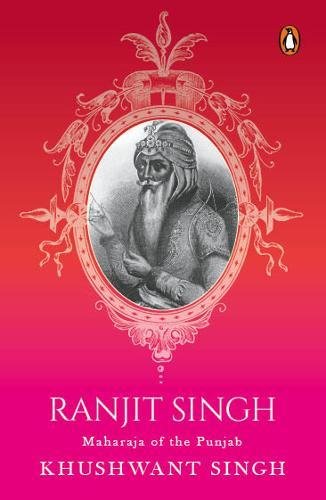 Ranjit Singh was in every way as remarkable a man as his contemporaries Napoleon and Mohammed Ali. From the status of petty chieftain he rose to become the most powerful Indian ruler of his time. His empire extended from Tibet to the deserts of Sindh and from the Khyber Pass to the Sutlej. His army was one of the most powerful of the time in Asia and was the first Indian force in a thousand years to stem the tides of invasion from the north-west frontiers of Hindustan.

Review
true portrait of lion of punjab...author clearly shows his scholarship and deep dwelving in to the repository of knowledge and bringing out UNBIASED work on the era of independent Punjab a rarity that came after 800 years out of a genius of man who turned the tide of invasions and those who were fond of invading were themselves beseiged by undisputable mighty although most generous and forgiving ruler in history...language is very clear and informative and it reads like a novel...Khushwant singh continues to live through his work --Raminder Sep 18, 2014

As Khushwant Singh embarks on his latest voyage into history, he tries to strike a balance with making a scholarly work and producing something that the masses in general would enjoy. It doesn't possess the acute insights of some of his previous works and leaves the reader wanting in some aspects. The story line seems to have a sluggish start with too many details outpouring of Khushwants pen, and then the end approaches as rapidly as the Maharajahs own as you'll read. Overall, the books seems to be a precursor to his Hisotory of the Sikhs. The stormy life of Maharajah with all its intrigues, power plays and political brinkmanship certainly makes for an interesting read. Those who are averse to the detailed descriptions however would find their heads nodding off in midst. --By Paramjit Kaur on 27 July 2013


Khushwant Singh was an Anglo-Indian writer, advocate, politician and journalist. A Padma Vibhushan awardee, Mr. Singh is best remembered for his humour, love of poetry and his vigourous treatment of secularism in his writings, most evident in: The Company of Women, Truth, Love and a Little Malice, With Malice towards One and All, The Mark of Vishnu and Other Stories and Delhi: A Novel. A graduate of Government College, Lahore, St. Stephen's College in Delhi and King's College London, he read for the Bar at the Inner Temple and served as a practising lawyer for nearly fifteen years before entering journalism. He has worked with The Illustrated Weekly, The National Herald and Hindustan Times. A prolific writer, Mr. Singh wrote till the grand old age of 99, releasing his last work The Good, The Bad and The Ridiculous a few months before his passing in March 2014.