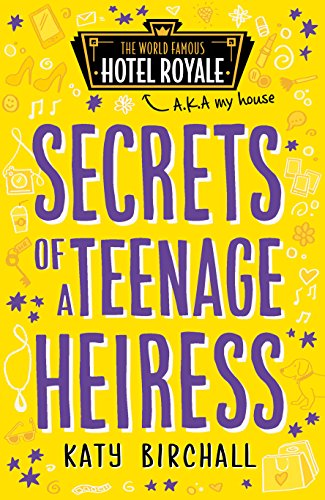 A hilariously funny and fabulously glamorous series from the author of It Girl. Perfect for 10+ years readers, and fans of Geek Girl and Girl Online

Flick's family have owned The Royale – one of London's most prestigious hotels – for generations. But Flick isn't that interested. She is interested in the newest guest – superstar celebrity Skylar Chase, and Sky's mega-famous group of friends, including dreamy YouTube star, Ethan Duke. But just as Flick gets the chance to join their glittering squad, she gets grounded following an unfortunate incident involving a prince, a wardrobe and a selfie stick (it could have happened to anyone!). With only her Instagram star pet dachshund, Fritz, for company, will Flick find a way to escape The Royale and join the fame game?

'Fans of Geek Girl will love this!' - Top of the Pops on It Girl

Katy Birchall is the author of the side-splittingly funny The It Girl: Superstar Geek, The It Girl: Team Awkward and The It Girl: Don't Tell the Bridesmaid. She also worked at Country Life magazine as their Deputy Features Editor. Katy won the 24/7 Theatre Festival Award for Most Promising New Comedy Writer with her very serious play about a ninja monkey at a dinner party. Her pet labradors are the loves of her life, she is mildly obsessed with Jane Austen and one day she hopes to wake up as an elf in The Lord of the Rings. Katy lives in Brixton, London.